A Guide On Cost Of Living In Austin, Texas 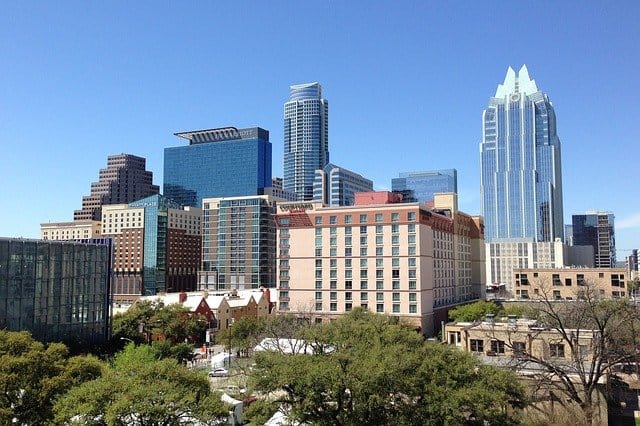 Austin, Texas, is quickly becoming one of the go-to places in the United States. Not just home to the fabled Chuck Norris, but Austin is also known for legendary music and a booming semiconductor and software industry.

But what’s the cost of living in Austin? How do living costs compare with other bohemian favorites like Dallas and New York City?

In this ultimate guide on the cost of living in Austin, we look at housing, schooling, utilities, and more. Let’s see how Austin’s living costs compare to those of other cities.

The Cost Of Living In Austin, Texas

Austin is a massively popular destination, and the city is welcoming new residents almost daily. The city’s Chamber of Commerce states that Austin’s population has grown a whopping 33.7% over the last decade.

Yet, despite this increased popularity and growth, it still works out as one of the most affordable places to live in America. Austin is, on average, 3% cheaper than anywhere else in America.

Today, Austin’s housing expenses are 2% higher than the national average. Despite this higher average price, there are different neighborhoods where the housing is a bit less.

Also, if you plan on renting in Austin, you can always move in with friends to help you cover the rent. So, you aren’t forced to live it up in a neighborhood you can’t afford.

Let’s take a closer look at the housing prices in Austin.

Rent in Austin is almost on par with the national average. New renters can look at paying anything around $1,430 a month for a two-bedroom apartment. This rental price makes this city the 15th most affordable in the country.

This average rental rate is a bit misleading, though. There’s a big difference between rent in the center of Austin and rates outside of it.

The most expensive areas are found Downtown. You can expect to pay anything around $2,500 and upwards in neighborhoods like Market District and West End.

On the flip side, less expensive neighborhoods, like those on the city’s northern edges, have a low rental rate of only around $1,000.

These neighborhoods are perfect for young, starter families, especially if you don’t mind the daily commute, which takes about 28 minutes to drive to the city’s center.

The most popular neighborhoods, such as Hyde Park and South Congress, have an average rental price of $1,430 a month.

Austin has far more tenants than homeowners. Despite this, the property market is still booming. From the last survey done in January 2012, the average price of housing has increased by 18%.

Prospective homeowners should budget for around $450,000 to buy an average-sized, 3-bedroom, single-family house in Austin. Of course, like most cities in America, the further you move to the outskirts of the town, the cheaper the housing becomes.

Cedar Creek and Round Rock are the two neighborhoods with the cheapest properties in Austin. Despite being the cheapest, these areas have been named up-and-coming neighborhoods, making them a great place to move with a young family and an investment in the future.

Saving some hard-earned bucks in Austin is easy due to its affordable utilities. Utility prices in Austin are a massive 12 to 15% lower than the national average. This low average will undoubtedly help you save money and make your life here comfortable.

Living in a basic, two-bedroom apartment, you can expect to have a utility bill of around $145 each month. This bill includes electricity, heating, cooling, water, and garbage services. Remember that Texas gets quite hot, so you’ll want to run your AC which pushes your electric bill up, especially in the summer.

Internet connectivity is also an essential utility for which you’ll have to budget. The average price for an uncapped 60Mbs line is around $60, making it one of the more reasonable internet costs in America.

You can also expect to pay a low $0.07 per minute of prepaid talk time. The price is far less than in other cities and will keep you connected to family and friends from all over.

They say that everything is bigger in Texas, and this certainly applies to the food. Austin has a booming food scene. Unfortunately, this makes dining out in Austin an expensive, if not unforgettable, experience.

A single meal at a food truck or diner can cost anything from $15, while a meal for two people at a restaurant starts at an average of $60. This pricing is far above the national average, making dining out in Austin expensive.

On the positive side, grocery prices in Austin are fantastic. The average price for groceries is anything between 11 and 15% less than the national average.

The average monthly food bill for a family of four is about $300, including all the staples and a couple of extras like treats and coke.

A loaf of white bread is prices around $2.50 while a dozen eggs are about $2.80. Don’t forget that famous Texan steak, which you can pick up for only $6 per pound. You’ll quickly see why Texas is known as the ‘BBQ state’.

When relocating to Austin, you will discover a world of affordable clothing. Texas has a thriving clothing and textiles industry, so clothing here is markedly more affordable than elsewhere in America.

You can get a pair of genuine Levis’s for as little as $40, while a summer dress is only $35. The pricing for new clothing sits comfortably below the national average.

There isn’t a big difference between Austin and other cities in America in regard to healthcare. Austin’s healthcare cost is only 1% lower than the national average, so you’re not likely to notice much of a difference there.

This means you can expect to pay $110 for a doctor’s visit and $95 to see the dentist. Veterinary services are also pretty averagely priced, around $50 to take Fido to the vet.

What does all of this mean? The quality and pricing of healthcare in Austin are standard. It doesn’t matter if you are moving from Washington or Georgia; you’ll be perfectly at ease with doctor’s fees in Texas.

No doubt, young families will be concerned about the pricing of education and childcare services in Austin. Primary school for one child averages around $16,800 per year. This average is cheaper than in other cities.

Keep in mind that there are plenty of private institutions, which may be more expensive than what’s listed here.

Austin is also home to the University of Austin. Having a university so close to home means prospective families with a student in the house won’t have to worry about paying for student accommodation.

Another significant cost factor to keep in mind is transport costs. Whether you choose to commute to work by public transport or drive yourself to the office, the cost of transport can make or break your budget.

If you’re planning on driving yourself around, you’ll love Austin. Gas prices here average between $1.45 and $2.35 per gallon. Austin is pretty big, so you’ll have to use transportation to get around. In fact, 79% of commuters in Austin use their own car to get around.

You don’t need to own a car to travel around in Austin, but it helps.

However, if you’re without one, there are a few options available. Several public busses and even a commuter train run daily from Downtown to Austin’s furthest, northwestern parts.

A single commuter can expect to pay $1.50 for a bus ticket. Day passes go about $2.50 per ticket. A recent study showed that only about 3% of commuters use public transport. Despite this low-low number of users, the public transport system is clean, safe, and effective.

Rideshare services, such as Bolt and Uber, are also readily available. However, since the city is so widely spread out, these services are more expensive.

Affordable entertainment in Austin is easily one of the biggest draws we can find. A single beer can costs around $4.35. This price for a beer is almost half as much as the same beer would’ve cost in New York City.

Imported beers are still the lowest in the country, and beer devotees can enjoy a cold one for as little as $2. Austin has plenty of bars with live music and a variety of themes to suit almost everybody.

Not all the entertainment in Austin is centered around the bars, though. A single cinema ticket is also only $12, which is about 10% cheaper than in the rest of the country. Austin is home to several art galleries and cinemas to entertain the most refined visitors.

Austin has plenty to see and enjoy. From wine and appetizer experiences to a tour of the breweries and the city at large. One of the most popular excursions is taking a kayak and exploring Lady Bird Lake.

If you’re on a budget, the city offers several free activities to do in Austin. In fact, Austin is ranked as the 24th best city to go on a walkabout. Keen hikers or strollers can explore the city’s greenbelt or even take a hike among some of the most beautiful nature trails.

On the topic of fitness, Austin offers gym bunnies some genuinely affordable options. You can rent a tennis court for as little as $7 and go to the gym for only $45 a month. Again, this is far cheaper than the majority of cities in the United States.

All of this makes Austin’s entertainment, health, and fitness incredibly affordable and wholesome for the entire family.

The Austin Chamber of Commerce reports that Austin is the 11th best-performing city among the 50 largest metro areas when it comes to employment and salaries.

The city has experienced a year-over-year increase of 7.3% or 77,200 jobs. We find that the increase in job opportunities in Austin is largely driven by the growing tech sector.

Despite being so old, Austin is quickly becoming a tech-orientated city. So, if you work in the tech industry, you can expect to make more in Austin than in any other city in Texas.

This drive towards tech jobs is partly due to the thriving semiconductor industry and the University of Austin being significant employers.

The average salary in Austin is $55,100 per year, making it better than the national average.

Austin isn’t just home to a thriving tech industry. It also boasts a strong service industry. These two strong industries help ensure that there are ample work opportunities in Austin.

The biggest question is whether you’ll be able to have a comfortable life with an average salary in Austin.

The short answer is a resounding ‘Yes.’ A $30,000 to $50,000 annual salary makes it much easier to live comfortably in Austin. This is especially true if you compare it to other cities, such as San Francisco and New York City.

Because so many people find that Austin offers decent salaries, more people flock to the city to make a living. Today, Texas is becoming more popular with young families than California or even Florida.

Our advice is, to be honest with yourself or your partner and see what requirements your particular lifestyle has.

Relocating is never easy. There are plenty of factors to think about. However, you’ve already taken the first, most crucial step, and that is by doing proper research.

Once you’ve decided on a budget, you’re ready to move.

If you plan on making Austin, Texas your new home, you won’t be disappointed. Austin is a vibrant, exciting city. It offers excellent education services, affordable living costs, and a safe metropolitan area that’s perfect for young families.

Every day more young families and professionals are relocating to Austin. They are benefiting from living in one of the more affordable cities in the country. Shouldn’t you do the same?